I woke up from a deep comfortable slumber, snuggled in my amazing bag, atop a bed of pine needles and surrounded by the warmth and protection of the forest. It was 6:45am, the light of day had been approaching for a while, and when I poked my head out of my bag, it came streaming in. Good morning! 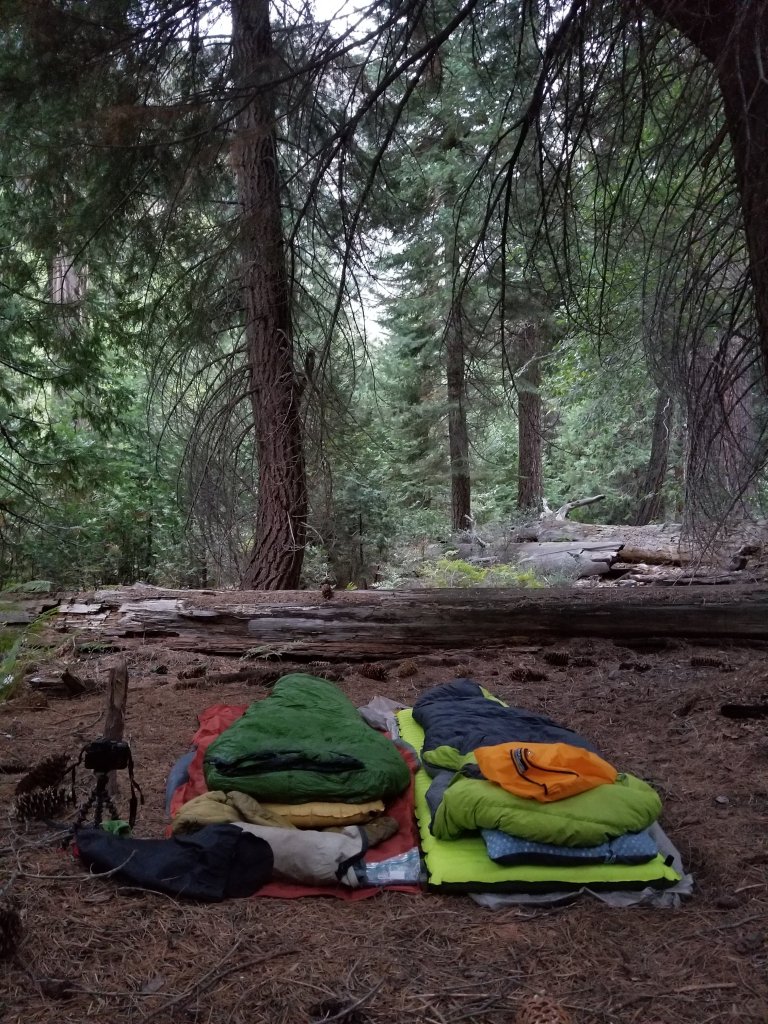 We sat and drank coffee and ate our breakfast, welcoming the day, anticipating the big climb ahead. We had a few more miles of easy downhill and flat walking down to Roads End, where the Sierra High Route officially begins. This trail head is also where the famous Rae Lakes Loop begins and finishes, and we saw a lot of hikers on that trail, having that adventure.

Most High Route hikers drive to this TH to begin their trek on the SHR, but we would recommend, for those who don’t have easy access from the west, coming in at Kearsarge Pass. It was great. Yes, we hiked an extra 30 miles just to start the High Route, but honestly it was a beautiful 30 miles and it allowed our bodies to adjust for a couple days before putting it to the true test.

This morning we walked along Bubbs creek for 4 more miles, sometimes coming very close to the water, sometimes climbing well above. On either side of us are towering walls of granite that are akin to the structures in Yosemite. We are actually in Kings Canyon National Park, and the scale befits the name. The huge rocks are just massive in scope, truly the steps of giants. We are loving it!

It was 11:14 am when we finally got to the Copper Creek Trail Head, and began the first climb, we are now “officially” on the SHR. Taking those first hundred steps or so, I was feeling my calf muscles burn already. This might hurt a bit, I thought. Soon, however, that feeling dissipated and I fell into a steady rhythm. I’ve grown to understand that rhythm is so important in hiking, and I think, especially important when climbing. It’s a combination of having a steady breath that matches a steady gate, one that elevates your heart rate, thus pumping the blood to all your muscles, providing them with oxygen, but does not leave your brain oxygen deprived. Since I just came from hiking the Colorado Trail, I am very acclimated to high elevations, well around 12,000 ft and in not too bad of shape, so I am fortunate and I can cruise up the 5,000+ ft ascent fairly easily.

Despite this harsh beginning to the High Route, trail itself starts out very nicely graded, and composed of big long switchbacks. The TH at Copper Creek starts at 4,800 some odd feet, and here at our campsite, we are nestled in at 10,400 ft, some 9 miles later. Now that 9 miles is actually a point of contention. According to our GPS waypoints, we are at SHR mile 7.1, but we recorded the track on GAIA today and it indicates we walked 9 miles. In addition to that, add the 4 miles this morning, and we’ve got a grand total of 13 for the day. Ha! It’s crazy, 13 miles and it took us 9 hours and 45 minutes! Of course we took breaks and we were absolutely in no rush. Actually, with a solid climb like that, you really can’t rush. You have to take care of your body so you can enjoy the rest of the trip ahead. No messin’ around, we’ve got some serious stuff coming up ahead, this is only the beginning!

I’m going to take a moment to talk about the bugs today. They were those little annoying gnats that happen to live at elevations around 5,000 ft amongst Oak trees, which is exactly where we were. They started to show up this morning a couple miles into the hike, and they were tolerable but still “there”. Well, they just kept getting worse. It is ironic, they are my most loathed of things, and here they were today. Why not? I decided it was a lesson in mind over matter and secured my sunglasses, pressing through the cloud of little floating black creatures. I swear they exist just to drive you mad. On the first few miles of our climb today, they just kept getting worse and worse. Still, I tolerated them, what else could I do? Actually, I used them as motivation to walk faster, thinking that the sooner I reached a higher elevation the sooner they would be gone. It is truly like magic, just above about 6,500 ft and just about where the Oak trees are no longer dotting the slopes, the gnats disappear. Thank God!

About half way up the climb, we stopped for lunch at a little creek that glittered in the sunlight. We peacefully sat eating and listening to the trickling of the water just a few feet away. I still had half an avocado left, and was really glad for it. I made a tortilla wrap with the avocado and some cheese and finished off the rest of my Smart food popcorn. The little creek was lusciously cold so I couldn’t resist making a small iced coffee for dessert with some dark chocolate. I really did not need the caffeine, which is the complete opposite of what was happening to me on the CT, today I felt totally energized. A lot of that has to do with the lower elevation, the several days of rest and the past two nights getting a full night’s sleep. What a difference! Still, I love my coffee and the icy cold water beckoned me to make a brew. I also hoped it would help me motor up the next 3,000 feet more swiftly, which it did.

After lunch, I was able to hike all the way to the top of the climb with a nice steady pace, about 2 mph or so, until I got to the top. I stopped a few times for a sip of water and to check on my progress, but didn’t have to stop because I was breathing hard or for fatigue or to take my ridiculously heavy pack off. On the CT, it was totally different, I was sucking wind a lot. Mostly this was due to the elevations above 11,000 ft, and sometimes it was in combination with high elevation and steep trail, and a fully loaded pack. This trail is so much more friendly.

By the time I reached 9,800 feet I could see well over the ridges and mountains that were towering over us just this morning. In a semi-circle I could see all the way in the distance, a raw granite backdrop touching it’s margins only with the sky. Those mountains are high, and now I am high too. Those are where we are going. My stomach filled with butterflys for what’s to come. I love getting into the high country, there’s just something about it. I tried to look down to where we’d come from just hours ago, and it was not even visible, all tucked into the shadows of the giant ravine where Bubbs creek flows between the deep, dark walls.

By 5:10pm I was at the top of our massive climb, dang, that took us almost 6 hours including lunch. Full day of nothing bu uphill with a 40 pound pack. Hmm… I was so relieved to have made it in one push after lunch, and ready for a sit down break when I reched the top. Here, the “trail” actually continues to climb, but our “route” takes a sharp right into the trees and boulders, at a seemingly random location, heading cross country to the North at a saddle at 10,300 ft.

I found a place in the sun to sit and rest for a few minutes while Hurlgoat caught up. He’s done amazingly well so far, coming from basically no hiking to this, while I’ve been hiking all Summer. He always adjusts super fast and within 20 minutes, I could see him down a couple of switchbacks below and I howled to him like we do “owhoooooo”, and he howled back “owhooooooo”.

“We made it” I called out excitedly. I was starting to get cold, sitting there in my sweaty clothes, so I layered up and curled up on the pine needles in the sun. He took a short break too, and sucked down a Snicker’s bar. We still had a little less than a mile to go, now all cross country, so we rolled on out of there in the glowing early evening light, officialaly off trail and officially “free”.

We ended up walking to a small lake that we mistook for Grouse Lake, and reachced it by 6:10 pm, cheering and feeling very relieved the day was over, until we realized we were off the mark. If there is one lesson you have to learn in cross country travel, you can never, never, assume you know where you are. Not until you have confirmed it with your GPS or some other obvious landmark which you can identify on your map. We had made it to a lake, indeed, but it was the wrong one. Dang it, we had to backtrack and re-calibrate our course. “This is just the begging” we said.

“This is certainly not the first and definitely not the last time this will happen” we both agreed and laughed it off. No matter though, within 20 minutes we made it to the real Grouse lake. And just in time to watch the alpenglow light up the towering granite walls that strike up an additional 1,000 ft higher than the lake. The water was perfectly still and reflecting the glowing rock. We celebrated and cheered, “we made it” for real this time.

In camp, we teamed up and while Hurlgoat set up the tent, I went to fetch and filter water. Travelling as a team is so new and different to me. I am so 100% used to doing everything myself, so whenever he offers to do anything for me, at first I resist, and if I do aquiesce, then I try to think of something I can do for him. It’s not designated camp chores level, but I would say it’s teamwork, and it’s feeling nice.

We enjoyed our dinner under emerging stars and talked about how the moon is getting big so fast, casting a cool glow all around the granite bowl in which we sit. We both cooked various dinners of rice and made hot tea and listened to a few John Denver songs out of nostalgia for the Colorado Trail.

Well, day One is coming to a close. The temperature is dropping, it’s time to get into the tent and get warm. We are both certain sleep will come to us very easily tonight, and Hurlgoat shares a feeling of contentment “it’s sooooo good to be here” he says into the night. And I know how he feels exactly. This is something he waited for over the past many months, working extremely hard to make it happen, and now it is time. The moment of anticipation has arrived, this is happening, now, in real time. I’m also SO glad to be here now.