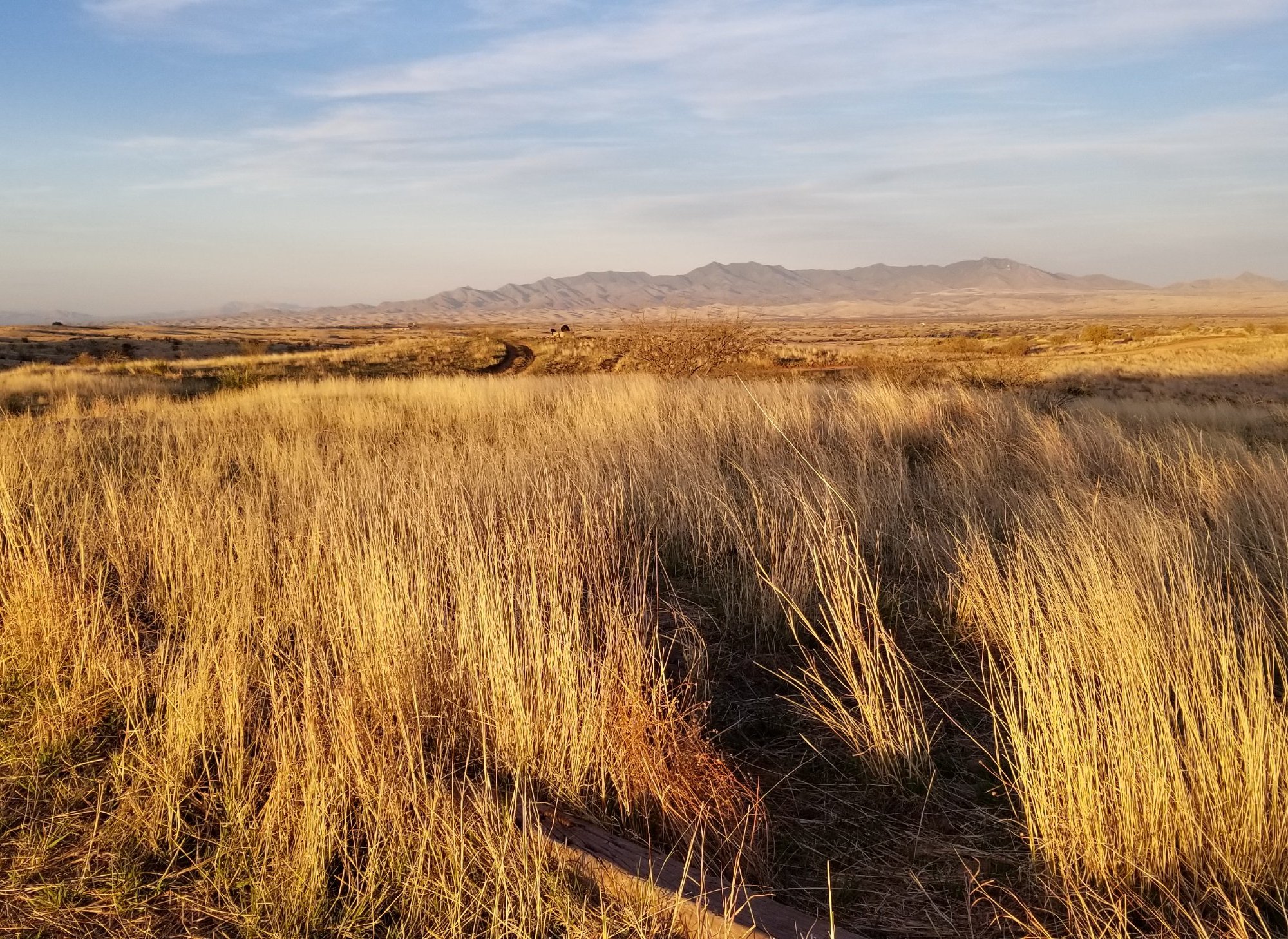 This morning my alarm went off at 5:05 am. There was no gray area, I shut it off and went back to sleep. I awoke again at 6:03 and felt ready to start day four of this journey. Day four. It doesn’t sound like much but I already feel like I have been out for a while. Maybe it’s a cumulative effect every time you get back on trail…

I decided to sit outside and face East where the sky was getting light and meditate. I was groggy but the fresh air and the giant open space around me woke my mind right up. I breathed deeply and set my intentions for the day, sayig a blessing and aasking for guidance and strength. I did some Yoga Sun salutations and got the blood flowing. My body felt stiff and heavy, achy even, so the stretching was really what the doctor ordered. I did all this by 6:30, and then made my coffee. I never wait to make coffee. Today I did.

The first three miles of the day were spent looking for white flaging that marked the route of the new trail. It made me think of hiking the GR5 in France where I was constantly looking for the red and white flags, connecting the dots all day and making lots of wrong turns. I made it to Anaconda Spring by 9:00 am. This was where I had planned to camp last night (9-10 miles out of town) before I realized the re-route was further in miles yet mysterious in location. So by the time I left the spring, I felt like I was just starting for the day, even though I actually started walkingat 7am. Hmph. 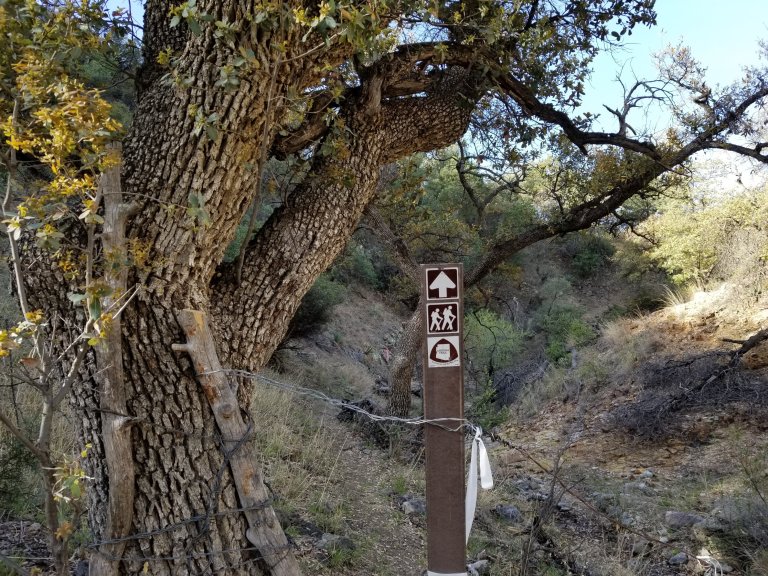 I met another thru-hiker named Biff, his trail name is Road Warrior or something it escapes me and Biff if you read this, forgive me! He is from Havasu and will be flip-flopping and he is carrying a lot of camera equipment. I didn’t talk with him much but we tackled the first part of a big climb together, then I sped up and didn’t see him again. I pushed my legs to make good time up this 2,000+ ft climb. I was asked recently which I prefer, uphill or downhill. I don’t even hesitate to answer uphill. I’m better at it and it’s less painful, and my heart and lungs are in fine shape so unless it’s at high elevation, or extreme heat, I don’t really get winded.

Today was hot. The weather forecast had called for about 90F but I really didnt feel that. I think because we climbed higher up and thus into to lesser temps. Don’t get me wrong, I took shade breaks and drank a ton of water, but it was tolerable and there was a lovely cool breeze all day, spectacular!

After the big climb I descended two miles to a wonderful creek just past Bear Spring. There was lovely clear flowing water in little pools that I could not resist. I took a break in the shade and took advantage of washing my socks, undies, and then dediced to do my shorts and bra and t-shirt while I was at it. I sat at the water’s edge soaking my feet, what a luxury. The water and shade cooled me to a very comfortable temperature and by 1:15 pm I was ready to get going again, time to face the hottest part of the day.

Just as I was leaving the water, I met a man and woman thru-hiking who are from Canada. I love all the Canadians! We chatted for a bit, their water filter broke, so they were having to use tablets and wait 30 minutes every time before drinking the water. What a pain! But they had plenty of tablets and I advised they get a hitch into Tucson and grab a Sawyer from walmart. Which I believe they will do. I wish them all the best! Their names are Ambler and Karma.

The elevation profile after the creek where I took my lunch looked quite chill compared to this morning, so I decided I was goin’ to take advantage of that and try to put in 15 miles after lunch. I was amazed to find that there was a ton of natural water all day today. I followed along a couple of beautifully flowing creeks and the trail would cross them several times.

Also, there is apparently a pipe of some sort that gold miners built back in the day to shuttle water out to towns and to use for gold mining. It seems as if there is an entire underground network of water passages. It’s fasciating because this area by the looks of it reminds me so much of Southern California where I grew up, but there was never any water there.

The trail meandered out into open fields of long yellowing grasses and bent over from wind. The sense of expansiveness and views became greater as the day went on. I pounded out miles and loved watching the soil color change from gray to brown to red to soot under my feet. I fell into a meditative state while walking for a few miles on some nice easy tread, it was dreamy and lovely. Most of the trail is not like this at all, there are so many rocks that you nearly always need to be looking at your feet. This was a treat.

By mile 6 after lunch I hit a wall. I sat on a rock for a few minutes, wanting a real break, but rallied and ate some nuts and told myself just to push to Kentucky camp, just 4 more miles and then take a break. When I finally got there it was 5:15 pm and I veered straight to a water spigot that fortuntely also was attached to an outlet. So, I took off my pack, charged my phone, got water, ate some snacks and stretched. Shortly, Robert the bike packer shows up and cant believe I beat him there! He thinks I’m super fast, but I’m not. I saw a trail register just at the gate to Kentucky camp and saw that Legend signed his name 2 days ago. Now that’s fast! 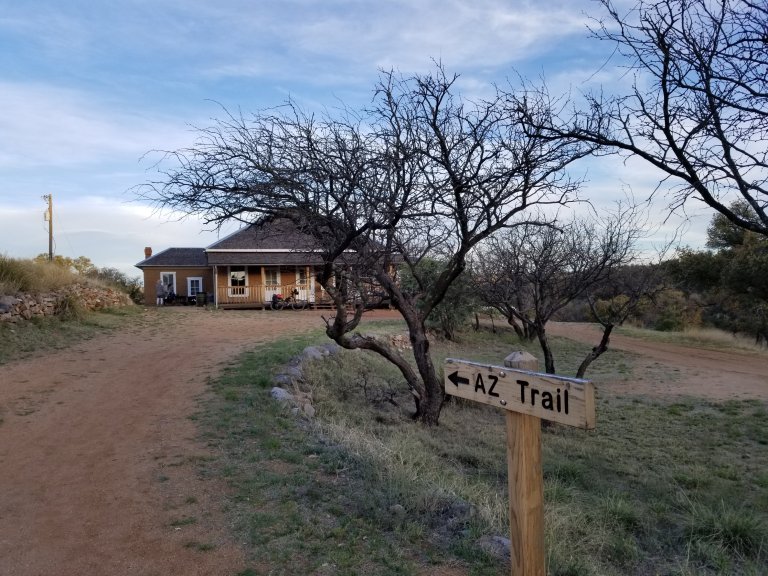 On my way out I decided I wanted to make another 5 miles and hike as late as 8:30 pm. I’d been planning all day to night hike because I lost some miles yesterday. On my way back to the trail I passed by two other thru-hikers Lizzie and Austin. They look like a cute young couple and seemed very nice, but I didnt chat because I was on a mission. I left just ahead of them and I was also just in the mood to be alone, and so I took off, I hope they didn’t feel I was rude. I never saw them again tonight, I’m not sure how far they planned to go.

I pushed on into a stunning sunset. What I am learning here in Arizona is that the sunsets are 360 degrees. No matter where the sun actually goes down, there are beautiful clouds that take on different shapes and colors in every direction. Tonight was especially amazing because I was out in an open field with hardly anything to obstruct the views. It was memorable and magical walking in fields of golden light cast against a deepening blue sky that framed multi colored clouds like a piece in a puzzle. Taking it all in….I walked, almost floating, as if under a spell.

Then it got dark. Ugh. And then my period started. Ahh, no wonder I felt like I could cry at the drop of a hat all day and no wonder I was feeling so anti-social. I hoped it would not get to heavy in the next couple hours, cuz I had some night hikin’ to do. Funny thing though, I notice when I get my period I feel a lot more fearful. Maybe it’s a symptom of hormone induced vulnerability, but tonight I hated hiking in the dark. I was convinced that I was going to run into a mountain lion.

At one point I heard a noise and whipped my headlamp over to find ten sets of eyes reflecting in the beam of my headlamp. Cows. Moments later, on the other side of the trail, there was heavy rustling in the brush. Whipping my light in that direction, I found more cows, but my heart was racing, adrenaline now fueling my footwork.

I continued up the dark trail. Then, I saw the little birds who’s eyes glow in the headlamp light. As you approach them they stay really still, then suddenly they take off flying when you get about 2 feet away from them, startling me as I’ve startled them. More adrenaline.

Later I climb up a big hill to a ridge where I am walking in tall grasses with what seems like nothing but a giant abyss in front of me. I stop to get my bearings, I turn off my headlamp and look up to see the stars above glittering like ice crystal’s on velvet. Where am I? What am I doing? What is this moment?

Then, it gets incredibly rocky on a narrow single track heading over the ridge. I have to watch my steps and the terrain becomes more and more difficult to negotiate. I start going very slow, thinking I will never reach my intended campsite. I stumble several times. I see eyes and hear rustling. I freeze in place and clank my trekking poles together. Then I hear and see what I believe is a deer, but I’m not sure, and at this point I’d rather not know.

I walk for what seems like a painful eternity up on that ridge and then it finally begins a big descent. I know at the bottom is where I will camp. I pleaded with the Universe and my unseen help to get me to camp by 8:30 pm and in the comfort of my tent by 9pm. I asked specifically for a tentsite that was safe and protected from the wind, that was flat and easy to get my stakes into, that didn’t have a bunch of cow shit everywhre, nor rocks. And well, that is exactly what I found, in the pitch dark at 8:34pm. And so it is. By 9pm I was in my tent, all tucked in and eating my dinner heartily. Day four comes to a close. I’m ready to rest.