Definite Uncertainty has been my mantra for the past several months. First it was of the trail, and now on the trail, especially now, it seems even more appropriate to use.

I returned to the trail today after taking two full zeros at my Mom’s place about a 45 minute drive from Picket Post Trail head. I never planned on taking so many zeros on this hike, but as it turns out I have already taken three. Definite ucertainty. I was so ready to get off trail three days ago, after the 21 mile water carry in the heat, that climb, running into eight snakes in one day and crushing 27 miles by 6pm. In addition to the miles I had done the previous three days, I was pretty ready for a break. I rested up sufficiently at my Mom’s and we enjoyed our time together over the holiday and ate a lot of good food! 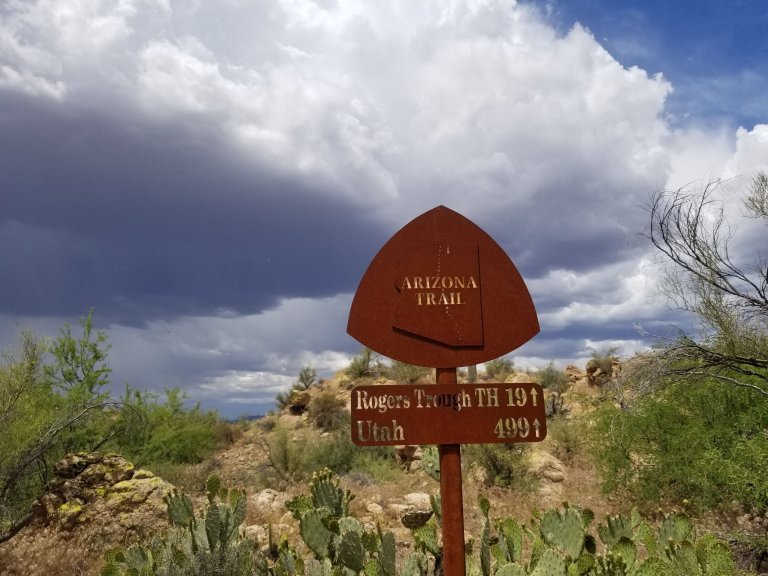 A turn of events of sorts is that I have been contacted for an interview for a job that is in my field of exprtise (acupuncture) and have agreed on a teleconference interview this coming Friday afternoon. So that means I need to be somewhere that I can get good internet, and get myself prepared for the interview, aka: not be hiker trash.

I tossed round the idea of pounding out more miles and attempting to cover the 86 miles to Payson before the interview, but realistically that would just put undue pressure on my mental space, and I would probably just stress about making miles. If anything at all set me behind what sort of a situation would I be in? So, I decided to make a wise decision and scale back my miles and give myself plenty of time. 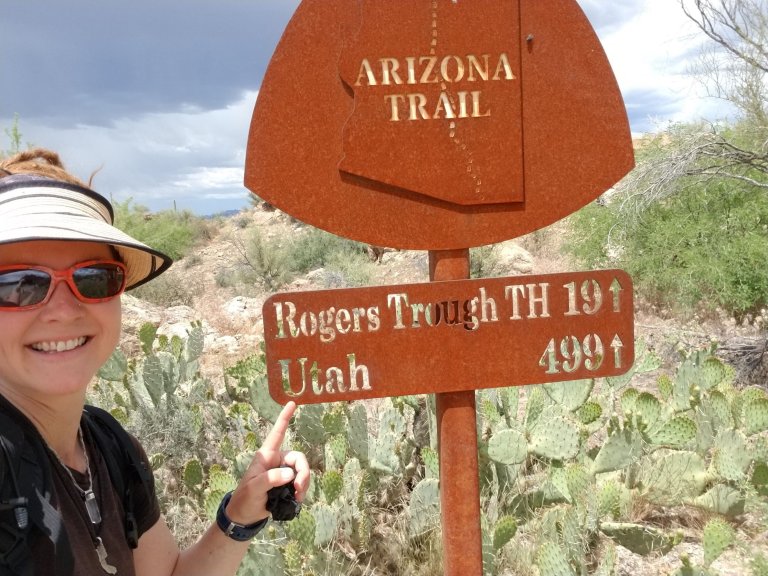 The plan now is to hike to Roosevelt Lake by Thursday afternoon, and check into a Motel in Tonto Basin for that evening. There, I can get a good night’s rest, a proper breakfast and have time to mentally prepare for the interview. My Mom has graciously agreed to come meet me also, so that means the blessing of even more time with her!

Today I got dropped off at the Picket Post Trailhead at 12:30 or so, feeling worlds different than I had when I’d left there 72 hours ago. I hugged Mom and Todd goodbye and thanked them again for all of their support, and I was off into the next unkown. 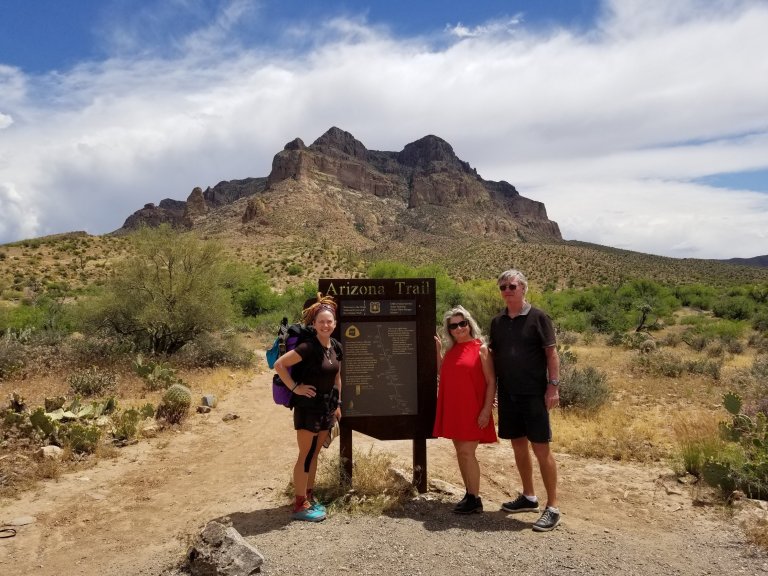 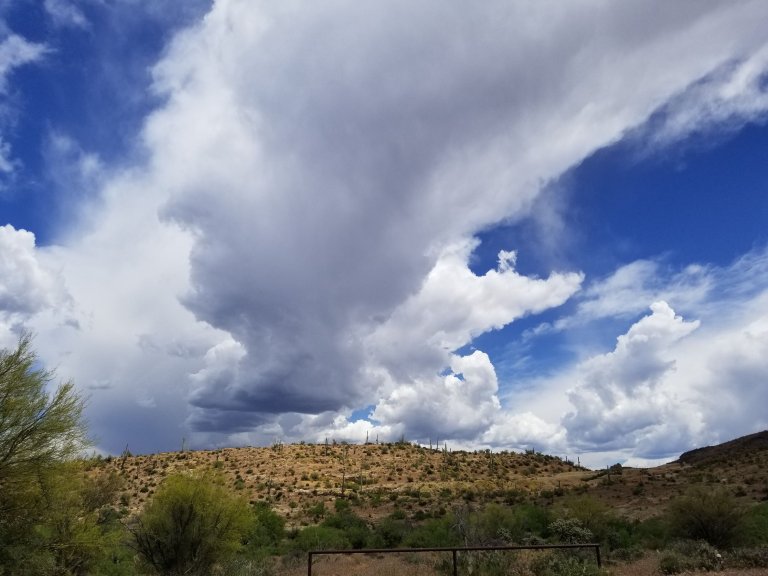 I will admit I have been super scared about the snake situation after seeing so many and actually stepping on one too, it has me on high alert and I am feeling a little anxious about it. For instance, I think things like is this a warning from the Universe that I shouldn’t be hiking? Is something bad going to happen to me? Jeez I really hope not. There’s no place I’d rather be than on the trail, nothing else I’d rather be doing. 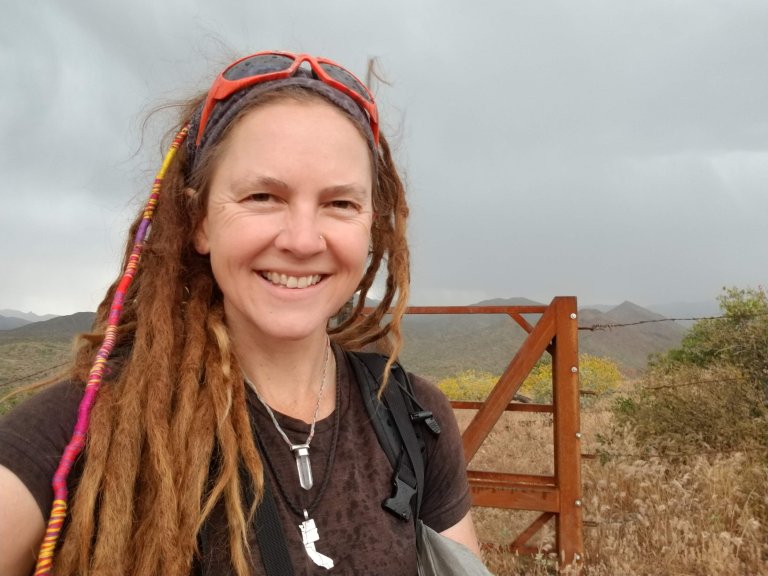 The trail crossed under Highway 60 and continued through some sandy washes before climbing up to a low ridge. The forecast was for rain, another reason I felt worlds different from the other day. Clouds were gathering and in the distance I could see the dark gray lines of rain streaming towards the Earth. It was really just a matter of time before I stood under that heavy sky with those dark streaking lines on top of me. 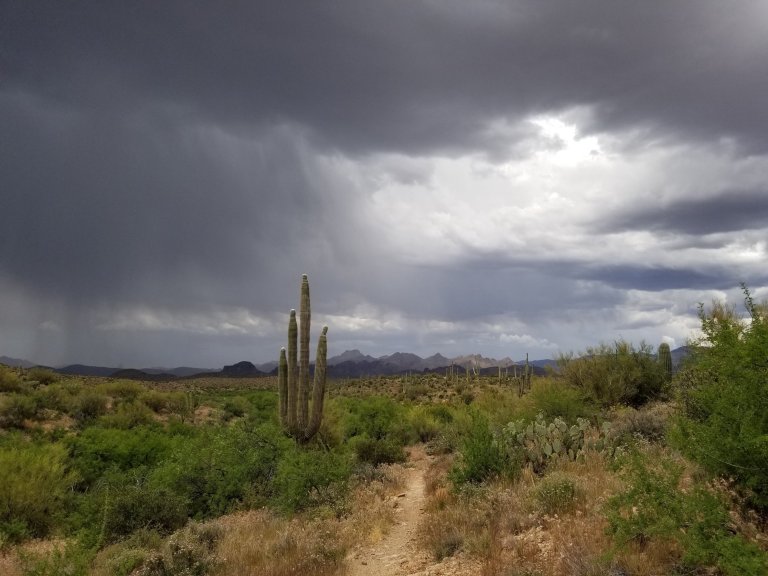 There’s something that happens in this kind of sky. The sunlight gets filtered through the thick blankets of collected water droplets and causes a certain warm glow. Today was magical, with refracted light cast on the vegetation. One particular dead saguaro struck me as quite beautiful. My observations were acute and because I was in no rush and could take my time and enjoy the desert dazzle, I easily found the magic I needed to keep me happy. With a goal of about 12 miles to hike for the rest of the day, it was EZPZ. 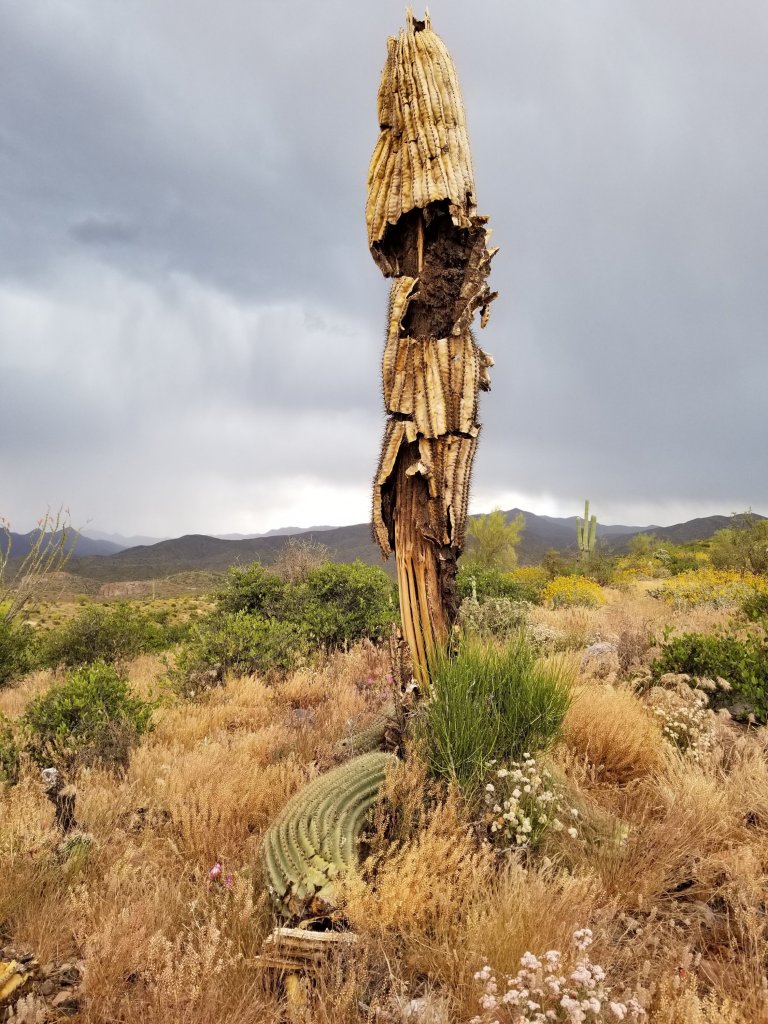 Shortly the winds picked up and it started to sprinkle. I welcomed the gentle female rain as she saturated me, just as she saturated the ground. What if my body were made of Earth too? The air temperature was soft and warm, the boundary between my skin and my surroundings dissolved. It felt wonderful. I was enjoying the walk tremendously and continued along in quite a happy state for a time. 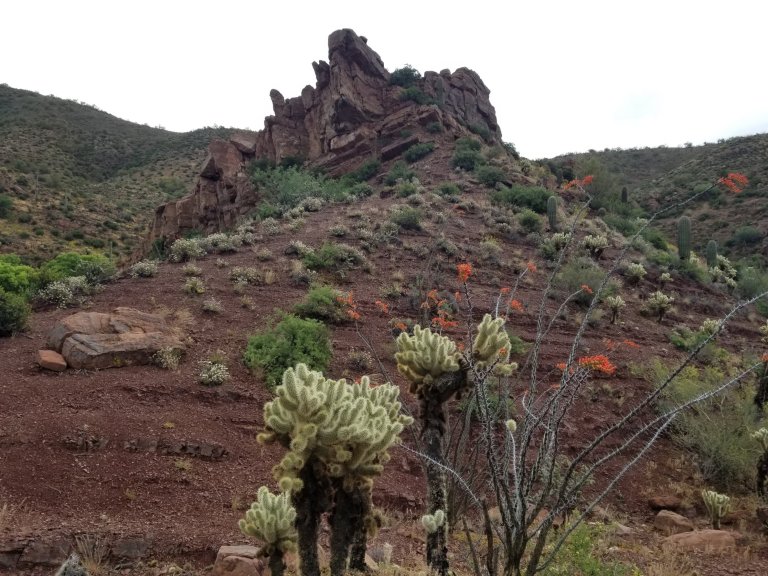 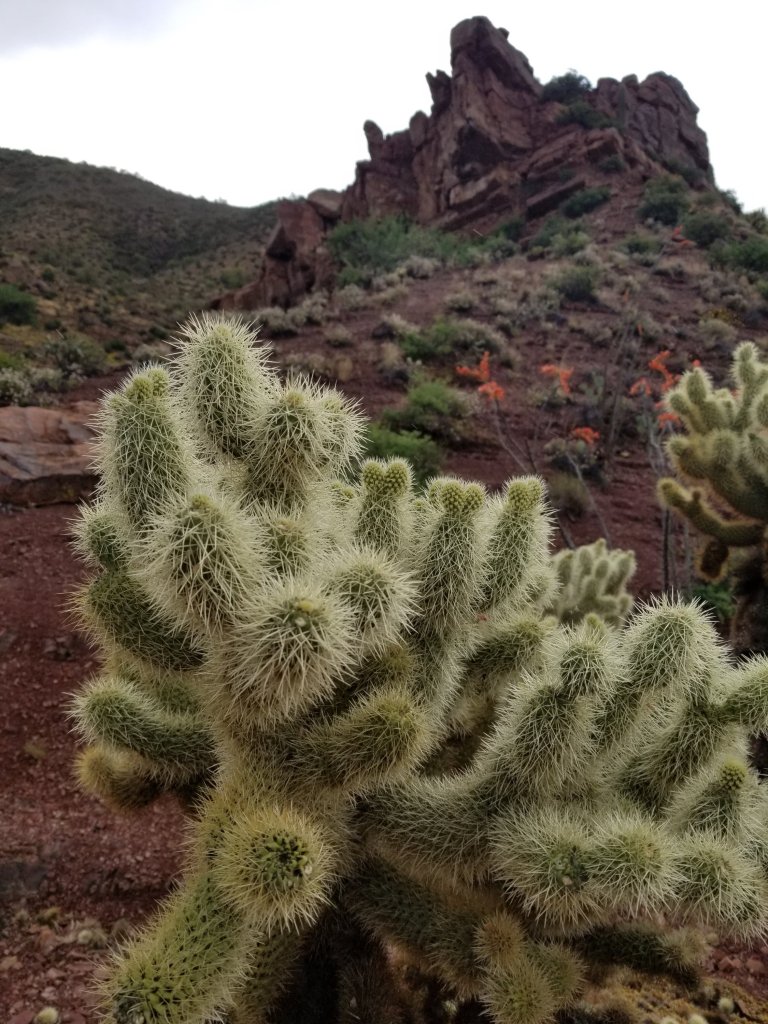 Then, another frickin’ rattlesnake showed up. This one was laying half way across the trail and I noticed it was in the middle of eating it’s dinner. It had a lizzard’s body sticking half way out of it’s mouth. My first reaction was one of disgust, that quickly turned to intrigue, and I stopped long enough to examine this situation and take a photo. Can rattlesnakes bite with their mouths full? Let’s not find out, I thought, quickly moving on. 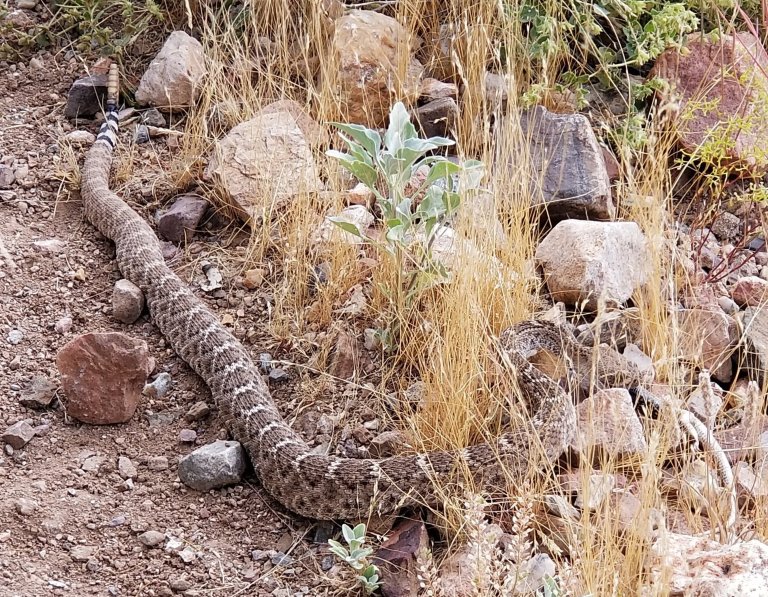 Re-focused on the trail, I continued on and enjoyed rolling terrain and watched the morphing clouds create sky art with dramatic shapes and colors. Thunder began to rumble and then it started to rain sufficiently for me to pop up my umbrella. 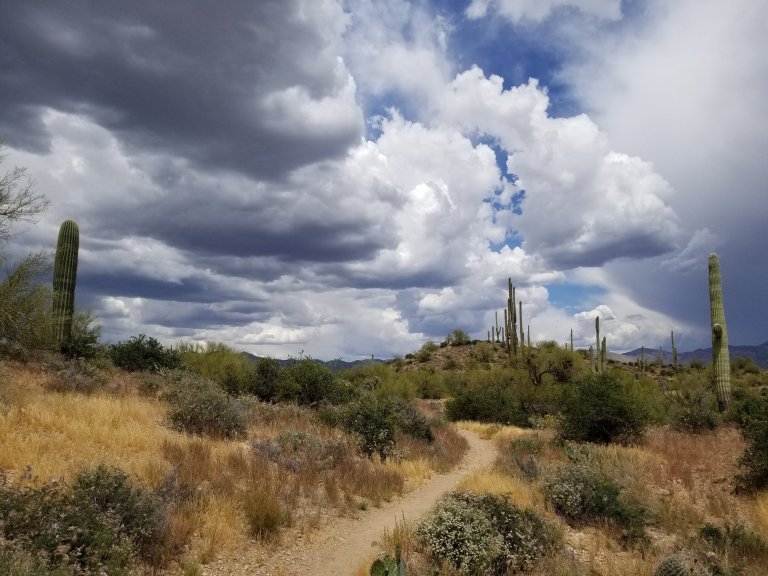 I walked under a power line that made zapping noises, and that made me nervous enough to start jogging. I often feel a slight unease when crossing under powerlines on trail, but today with the boltz of lightning so close by and the constant rolling thunder, the threat felt a little more real.

I sped up and once in safety, popped up my umbrella back up. This continued, with intermittent rain for the next two hours, a sudden downpour and then ceasing. Blessings from the sky off and on, off and on. The rain was peaceful and the raindrops semed to scatter at my feet over the dry surface of trail before mother Earth drank them up. This was such a lovely alternative to hiking in the heat! 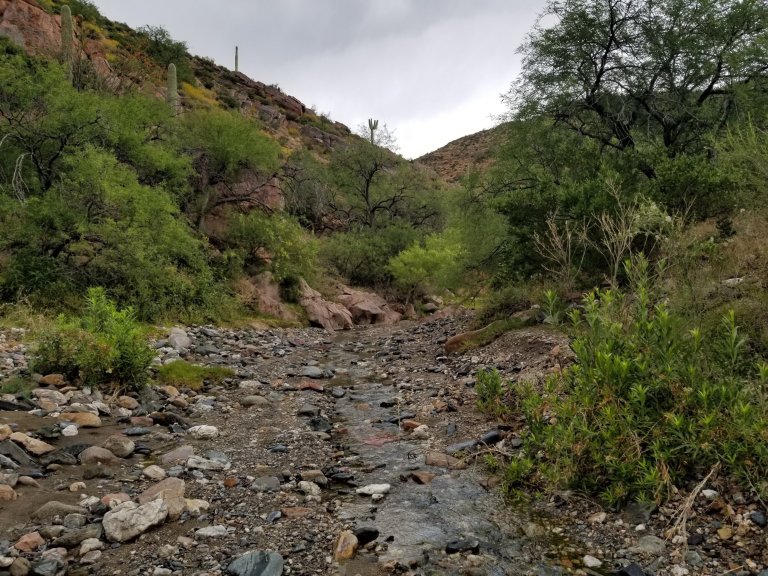 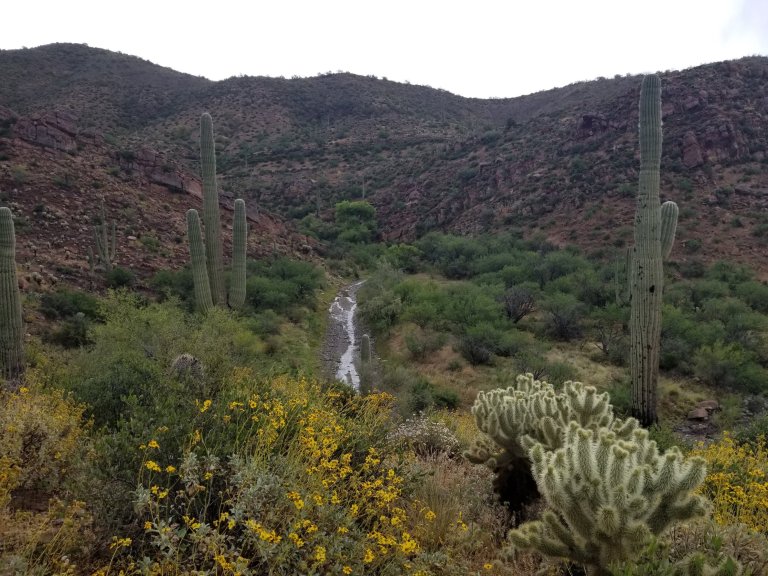 As I continued up the trail, I had a lot of newfound free mental space, so I found myself pondering about the job interview, my future, what changes were coming my way. And, of course, the inevitable question, will I be able to finish this thru hike? 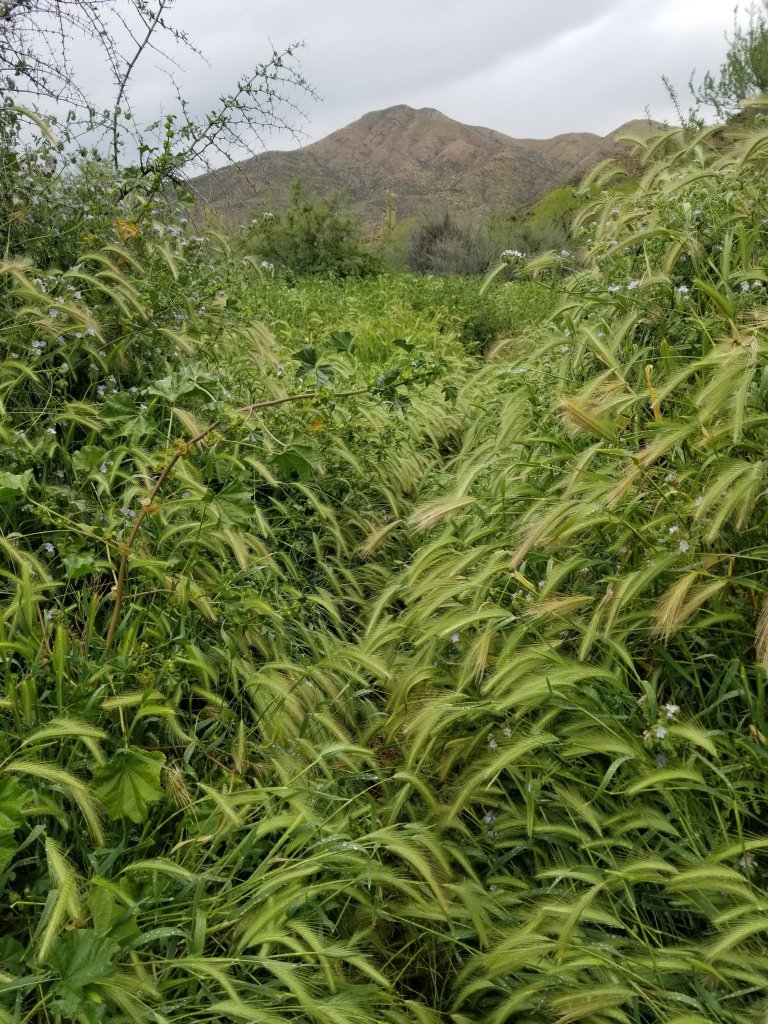 By around 5 pm I rounded a bend, I had just determined to hike another 2 miles to reach the next camp, when I saw two tents set up in a clearing just off the trail. It was Eagle Eye and Katy Did. I was so glad to see Eagle Eye again and Katy Did, well I had heard about, as her reputation preceeded her. She is in her early 70’s and is a double triple crown hiker, plus she has loads of miles logged on other trails, including the AZT before it was even complete.

I walked over and sat down on the ground, my rain skirt draped over me, leaning back against my pack like a comfortable chair. We three began to chat in that familiar way we hikers do. Trail chat. You know, food, gear, when you started, why you’re out here, what other trails you’ve hiked, what struggles you’ve encountered, more about food, more about gear. Good ol’ trail chat.

I even bent their ears a little about my job interview and whether I was going to be able to finish this hike. Katy Did offerd me some wonderful advice.

Her words penetrated my heart and mind, she is right. Look at her! She is my example. There is no reason why I won’t still be hiking myself, when I reach her same age. It’s amazing how the trail brought her to me right now. Exactly now. It’s so true. The trail provides. Especially in times of definite uncertainty.

We were all so engaged, I hadn’t even bothered to take my pack off as I really had still planned to continue hiking that 2 more miles. An hour had passed though, and it became evident I should just stay and enjoy the company. Take your pack off and stay a while Mary Poppins!

I decided to go ahead and join them in camp. I had absolutely no reason to keep hiking at that point and we were having such great conversation! I was excited to camp with other thru-hikers, especially two very interesting and inspiring women. This was only my third night camping with anybody else, so it was a real treat. I’ll take it! 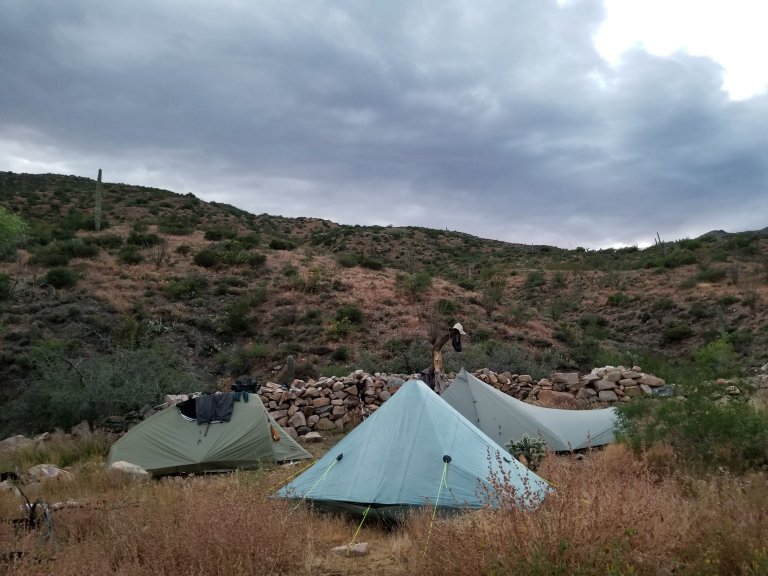 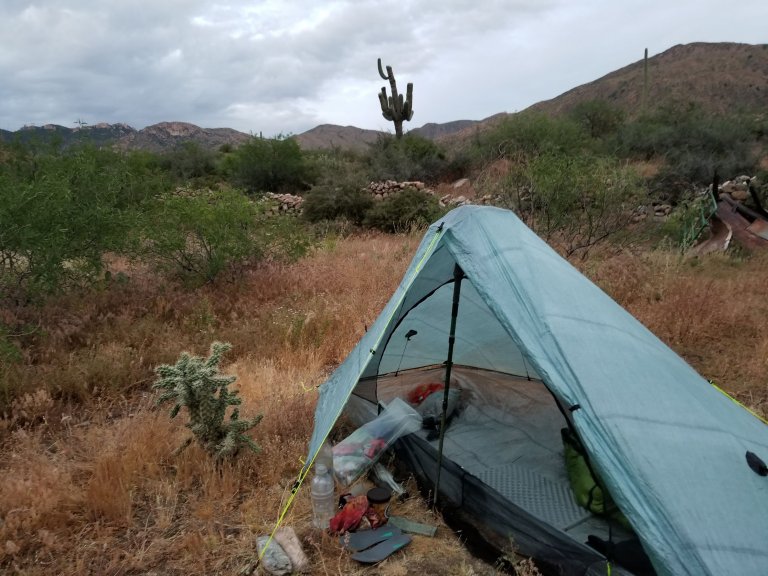