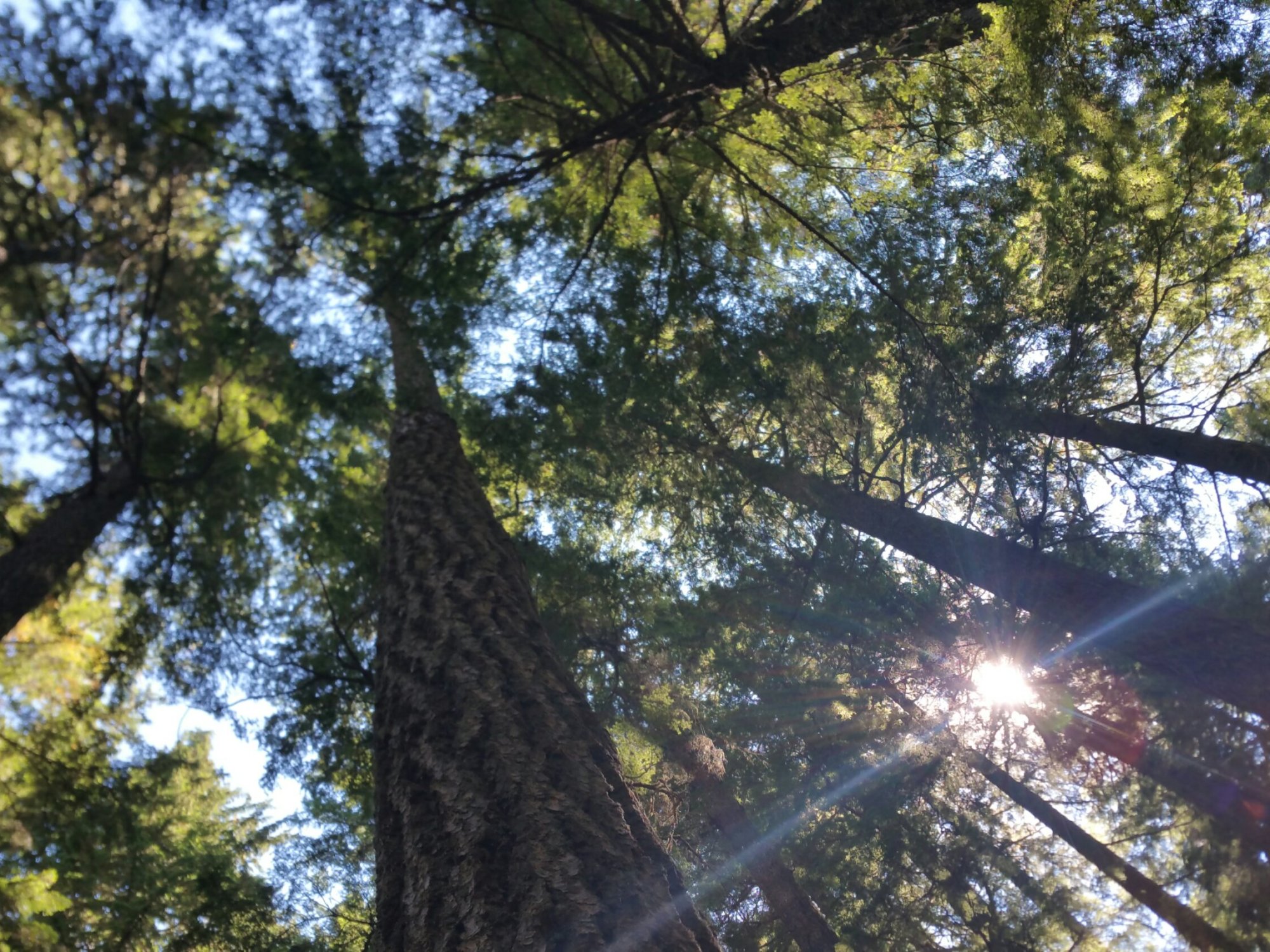 I woke up early, again, as my body is used to this rhythm. Depsite the black-out curtains and quiet hotel room,  the bed and soft sheets, I still woke up early. It’s okay body you don’t have to start hiking yet….you get to eat first!

By noon, after breakfast AND curry from Ardvark, Carrot and I head out to the trail with a steep climb up the ski slopes. It is already getting hot but I can tell it won’t be as hot as yesterday. The heat had zapped me yesterday, and I was grateful that it was a little cooler. Full pack of resupply food, plus water, I shouldered my pack with some trepidation, but to my surprise found that I actually felt really good. I had iced my ankle, ate real food, and rested for nearly 24 hours, what a miraculous turn around, I felt totally renewed. And, I had a friend!

We hiked strong into the forest and chatted about all sorts of things along the way, from health and the brain-gut connection, to other trails we’ve hiked, to deforestation and it’s consequences, making the time go by fast. I felt embraced by the lush forest, as it wrapped it’s gentle hands around me each time I re-entered, by contrast to the harsh reality of clear cuts we walked across. The trail traverses sections of logged areas and they were hot from the exposure and looked so barren, so molested and depressed. Every time I would walk back into the living forest, feelings of intense peace and serenity would wash over me. It made me feel safe, whereas the open logged areas made me feel very vulnerable and on edge. In the forest, there was shade, cool fresh oxygenated air, dappled light, lush understory and smoothe padded trail.

I was grateful to be hiking with someone who had hiked the PCT before, like me. I had consciously been trying to not to spoil any surprises when hiking with Monica, and also just didn’t want to be that hiker who is constantly reminiscing about “last time I hike here itwas like this…” but sometimes I could not help it. I am constantly reminded of things past, things that happened last year on the trail, that good ol’ nostalgia, but I hold back. With Carrot, I realized that we both had lots of nostalgia from the trail, so I indulged inthe nostalgia. She was hiking this section of WA for the fourth time, in fact. So, as it goes, we both were often chiming about things that happened in our previous thru-hikes, and that felt good to me. Like this spot, for instance, Crush and I git thebedt trail magic here, and we took a photo right here sitting in camp chairs…the flowers were gone then. That’s Mount Rainier looming in the distance. We will be there soon! 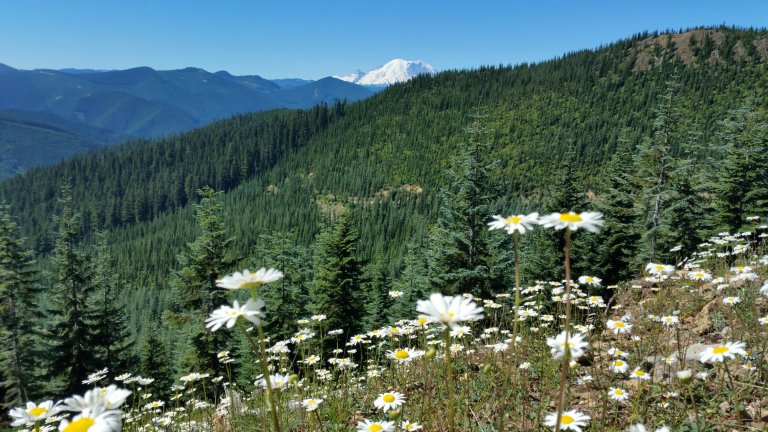 Specifically, another memory I recalled from last year, was when Crush an I had hiked this section. It had been raining for days, and it was September and it was cold. It was this particulalr section, just before getting into Snoqualmie Pass, that we all had borderline hypothermia and the most amazing Trail Angels saved the day eith tents, fires, hot beverages, hot soup and the warmth of human contact.  What a difference now, with the blazing heat. You would never know how dangerous this exact section had been before. In the height of Summer, in the presence of boob flowers, we were safe.

Others had not been so fortunate last year. Everyone in our community knows about Kris Fowler (Sherpa) who went missing last Ocober, only 6 days after I completed my thru-hike. This section was the last place he was seen. There was a posting at one of the trailheads up here with his photo requesting any information or clues as to his possible whereabouts. I thought as I walked about what could have possibly happened to him. Carrot and I discussed the possibilities of him walking down any of the multiple dirt roads around here, and how intensely difficult it must have been for him to try finding his way out in the snow. Moreover, what a challenge for a search party to attempt locating him now. The forest is so thick, dense, and enormous. I just hope he was at peace out here in his final days.

Carrot told me quite a lot about the Hayduke Trail, which sounds amazing. It’s actually not a trail, but a route, which winds itself  through Southern Utah and Northern Arizona. It’s roughly 800 miles and passes through Arches National Park, Canyonlands, Capitol Reef, The Grand Canyon and Zion. What?! This, to me, sounds so intense…..and amazing. I am very curious and I love to hear Carrot tell me all about it. She describes how that route is very tactile and hands-on. You aren’t just walking along a footpath, you are navigating, searching  for the route, climing over rocks, wading up rivers, and you are literally never in touch with civilization. You have to cache your re-supply food ahead of time by driving up long dirt roads to remote locations and burying your food. Then, you have to mark the waypoints and hope that whilst wandering around in the vast unbounded space of desert, that you re-unite with your food. It’s a much slower pace than a thru-hike on the PCT, and there are way more apparent actual threats that could cause you to live in fear of what “might” happen. I have thought a lot about fear on the trail, especially in previous expeditions. Specifically, what causes fear? I have to ask myself what is an actual threat versus a perceived threat? Is the absence of water a threat? Something to fear? What if you have the tools to acquire water? What happens then? It’s not until you get to the water, that you let your guard down and begin to once again, feel safe.

As Carrot is telling me all about the Hayduke, I begin to think about the movie Neverending Story, when the little boy goes to the bookstore to hide from the bullies who are chasing him. He finds the big book with the Orron symbol on the cover, and the old man who owns the shop is skeptical that the boy can even read. Finally the old man says “have you ever been Captain Nemo, fearing for your life as the giant squid is attacking you?” and the boy says “yes” with an expectant tone. “Weren’t you afraid?” asks the old man. “But it’s only a story” says the little boy. “That’s what I’m talking about” says the man, “Your books are safe.” It seems to me the PCT is “safe” like those books, and something like the Hayduke, well, it’s on a whole other level. And I am intrigued…yet humble.

By dusk we are at Stampede Pass, a dirt road with a pull out and surprisingly, there are some vehicles that drive by. We joke about it being the Trail Angel vehicles coming to bring us trail magic, but they don’t stop. No matter, though, we have found a stealth spot in the woods on an old overgrown dirt road, and we set up camp for the night. We made surprisingly good time, 18 miles and 4,500 feet of climbing in just about 7 hours. We are tired, happy, and I feel safe.