Today is Thursday May 12th, 2016 and I am way behind on this blog. I left off at day 3 out of Tehachapi, heading to Walker Pass, and since then I have taken three zero days at my Mom’s house, and hiked over 100 miles, said goodbyes to several friends, but met lots of new hikers too. I also, just today, passed the 700 mile marker and made it to the iconic Kennedy Meadows, which every thru hikers knows is the beginning of the Sierra’s. Kennedy Meadows is met with so much anticipation, because here is where we wave goodbye to the Southern California desert and begin a completely new challenge, hiking in the High Country. Our concerns are no longer about where the next water source will be or the scortching sun, seeking shade, or watching for rattle snakes. Starting tomorrow, things change. Entering the Sierra’s is in a leage of it’s own, especially this year, because of the snow. 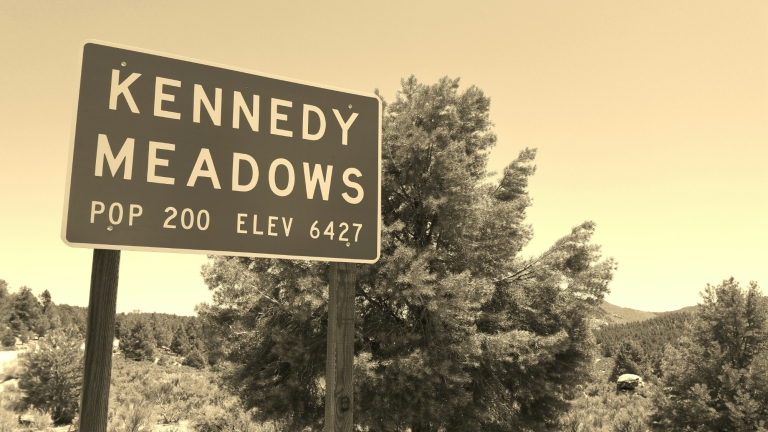 Since it is getting late and I have so much to cover, this will have to just be a recap. I made it from Tehachapi to Walker Pass in four days, covering about 87 miles, and when I got to Walker, my Mom was there and brought oranges, watermelon and love. She took several hikers to Isabella and I went home with her for a couple days off. It was perfect timing as it was Mother’s Day and it turnd out to be a rainy day, so we stayed in our pajamas all day watching old turner classic movies and eating and sipping tea. It was downright perfect! On the second day off I spent much of the day re-organizing my gear, getting everything ready to switch out for the mountains and snow conditions. I tried on my pack, complete with 10 days of food in my bear canister plus all my snow gear and all I wanted to do was whimper. It was ridiulously heavy….

The next day my Mom drove me back to Walker Pass, kissed and hugged me goodbye like sending her child off to kindergarten, and off I went with a hiker named Ski, and we started a hot dry stretch from Walker to Kennedy, a stretch of trail only 50 miles. At first I was surprised at how how and dry and steep the climb out of Walker was, but shortly we were amongst some friendly shade trees again.

For the next 2 days it was like this, trees, then exposed slopes, hot hot sun, and still a plethora of wild flowers. As I climbed over the ridges, first I could see the Eastern Valley below, and eventually the granite of the Sierra Range started to show.

It was quite an exhilerating feeling, knowing that these mountains are getting closer, and knowing that I had walked every step of the way, seen every contour of landscape with my own eyes, is pretty stellar. Still, even after all I have done and seen in the past 49 days, is only 25% of the trail. On Wednesday afternoon, my new hiker friend “Prince” and I passed the 1/4 mark and we were pretty exuberant! 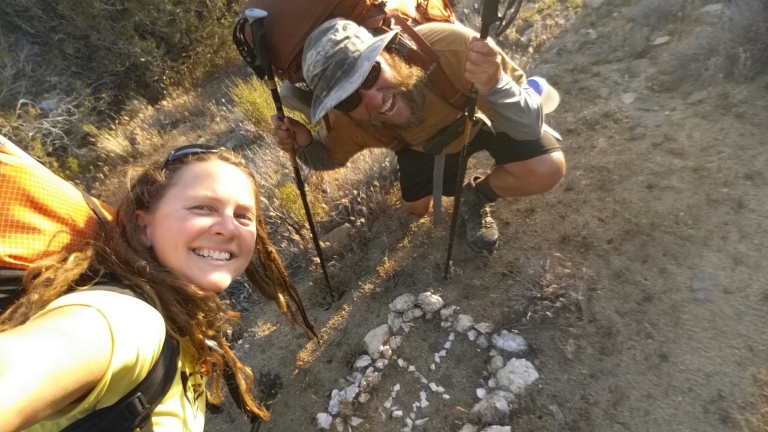 I caught up with Prince on Tuesday afternoon and we ended up hiking together for the next 2 days, enjoying some really great conversations, a couple great sunsets, and also I had my own private musical concert with his talented playing and singing with his Ulelele, “Ingrid”. 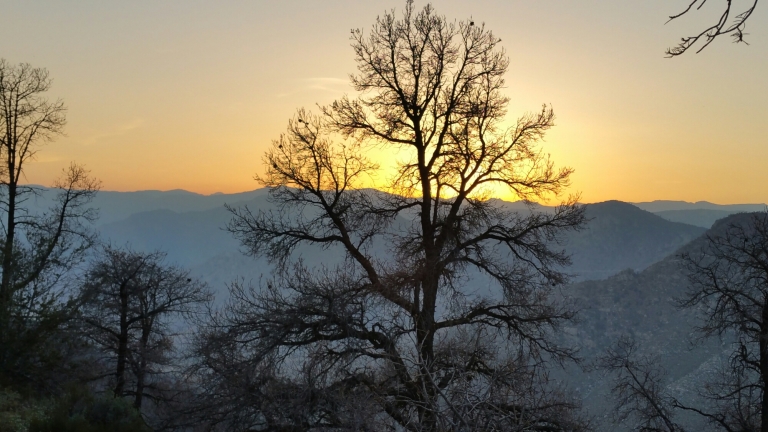 Just this morning, and that seems like so long ago, we woke up to crystal clear skies, and our first real actual view of the Sierra’s thus far on our PCT journey. If you look waaaay in the back center here, you can see the snow covered mountains: 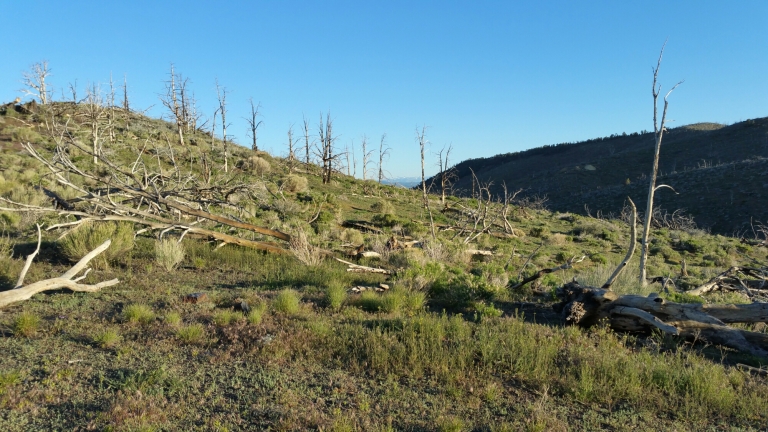 They loomed much larger in person, fortunately, later that morning, just about a mile up the trail, I was able to capture a better shot: 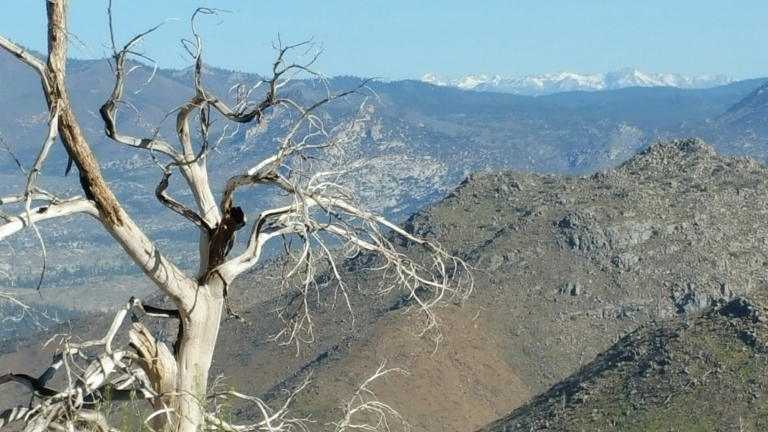 By my compass, those mountains were True North of where I stood, and I paused this morning to gaze at them, knowing I would be up there in just a few days, covering all that ground you see in between here and there. I have come so far, yet have so far to go…

Shortly after this view, the trai descended and curved, nearly merging with the South Fork of the Kern River, and wow was I happy to have access to that water! Yesterday and today were such hot days, so much so that yesterday I had to stop and sleep in the middle of the day, and today I had to plunk my feet with shoes and socks on right into the water and also get my head wet. Not only that, but all I could think about today, as I hiked the 13 miles into Kennedy Meadows, was that cold beer I would be getting. So here I was dreaming of cold beer and dunking my feet and head into the river, knowing that in just a matter of days I will be wrapped in my down booties and pants, heating water for tea, wearing crampons and carrying my ice axe as I climb Forrester Pass, the highest pass on the entire PCT, at 13,200 something feet, very near to Mt. Whitney. The contrast is a bit mind boggling.

When I arrived in Kennedy today, my Mom and Todd were there with all my snow gear and food for this coming week. We enjoyed another short but sweet visit, eating lunch at the nearby Grumpie’s cafe, and then I needed to focus on packing my gear up and they needed to get back on the road. 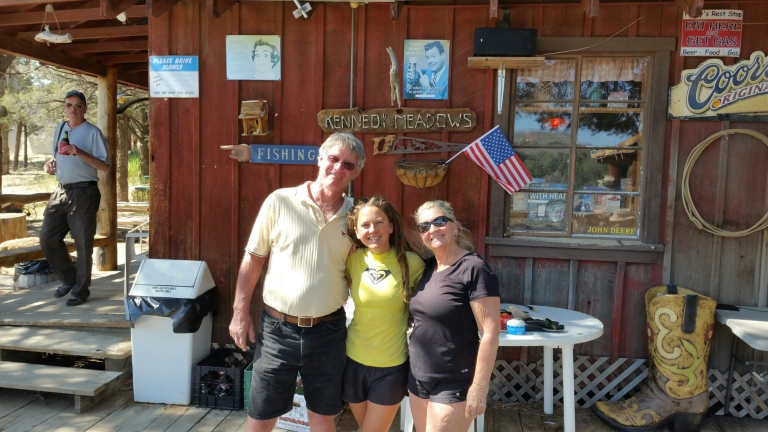 One last goodbye and I am back with my hiker group, some familiar and most are new to me. I am going to be taking a Snow Skills Course offered by Mountain Education, starting on Tuesday morning, and there are two other hikers here with me who are also taking the course: Betty “Two Bar” and “Overload”, who hikes in a Scottish Kilt, LOVE that! This is him weighing his pack with the bear canister and snow gear. 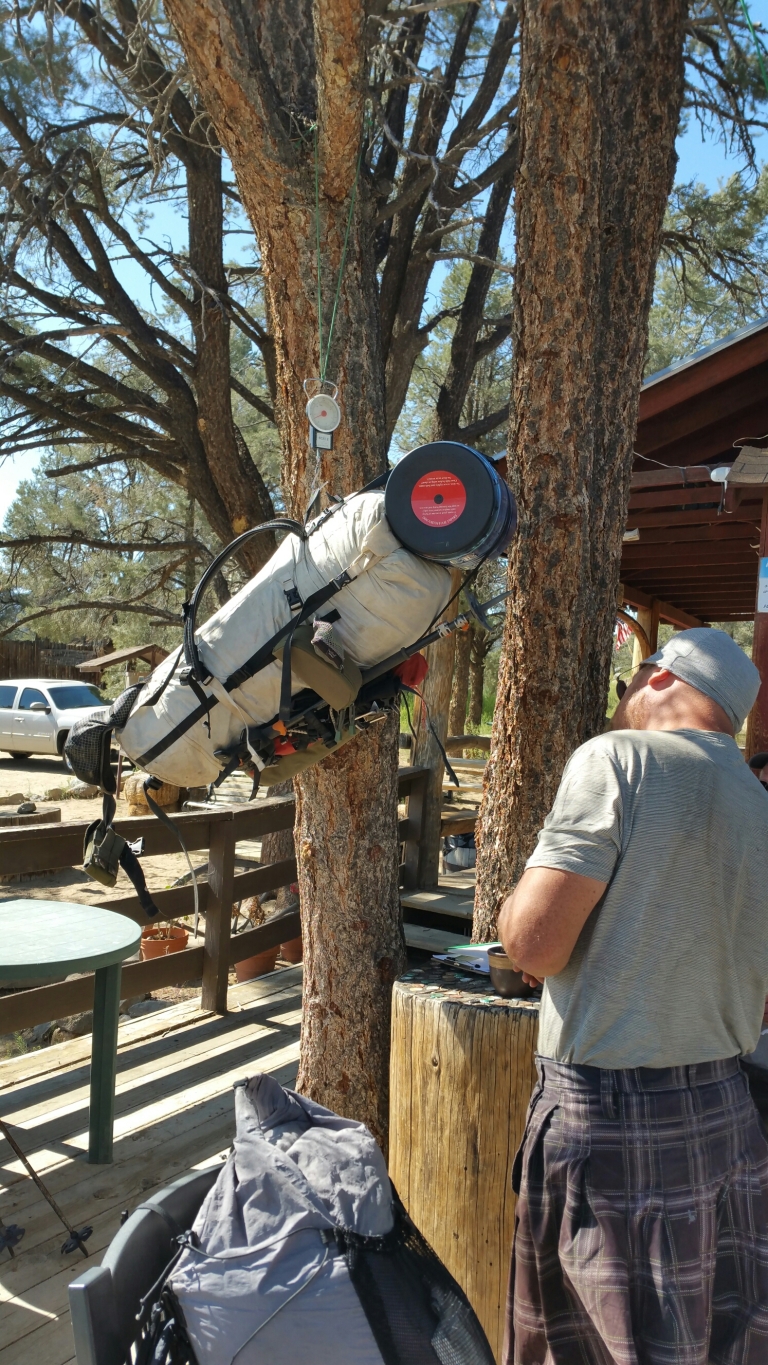 Many other hikers are opting to skip over the Sierra’s for now, heading North and then planning to return to this area and finish the hike after the snow has melted. Then there are a small handfull who are going to attempt to hike through, me being one of them. I would not feel comfortable trying if I was not signed up for this course, having hiked the John Muir Trail twice without snow, I know what I challenge I am in for. A BIG one. So, here I go, I am heading out back on trail tomorrow, and will be in snow and high country after 24 miles. After that it is another 400 miles of High Sierra and snow, all the way to my home in Tahoe. I hope this is something I can do, and I hope if it’s not, I will recognize that and go to plan “B”. But, for now, my motto is “when you get to the top of the mountain, keep climing”. So, wish me luck!