We knew the earlier we got going the better, so we could make it to Twin Lakes, grab a bite to eat and drive back to my house in Tahoe, about a 3 hour drive. Nevertheless, the alarm sounded at 5:30 am and since the wind hadn’t let up all night, and was still howling this morning, it naturally made it that much harder to motivate. We stayed tucked into our sleeping bags for about 15 minutes and finally pulled the plug. Gotta go!

Despite the howling wind, the ambient air temperature wasn’t nearly as cold as the previous two nights had been, still though, my thermometer read 30 F and that was without the wind chill. This wind was icy cold and just took the heat right out of you. It makes me think that Fall is really well under way, and Winter is creeping her way toward us. It’s a sinking feeling in a way because while that means hot tea, hearty soups, gloves and scarves, it also means hiking season is coming to a close. At least in the High Sierra. 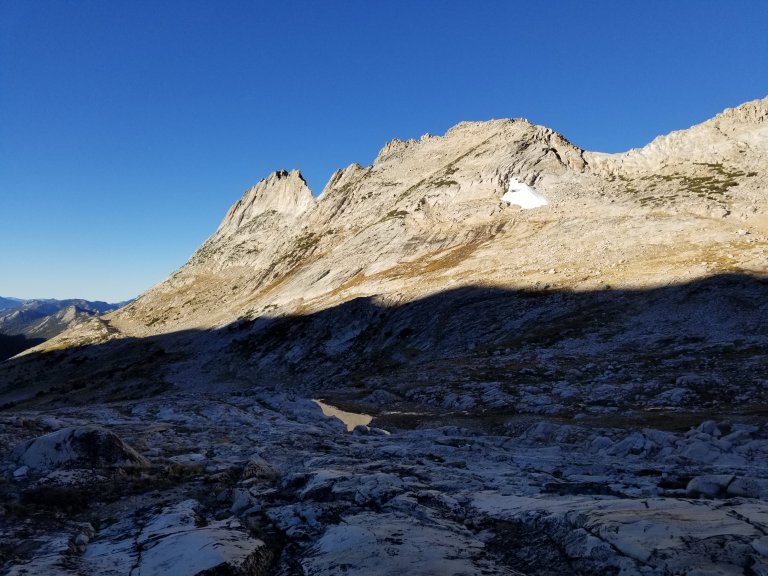 We made coffee in the vestibule of the tent, out of the wind, and both crammed some breakfast into our mouths. We packed up pretty fast and got walking by about 7:30 am. We had wandered about a half mile away from the Route, so we were down lower in the basin of Spiller Creek and about a mile and a half from Horse Creek Pass. I wasn’t fearful about this pass in the least, but I had read that it can be icy on the descent of the Northern side, so I hoped it wasn’t going to be a problem so early in the morning. With all the biting wind, I was ready to get down into a warmer place and we both had given into the futile mindset of fantasizing about “real” food. Soon, we will have “all the things.” Soon. 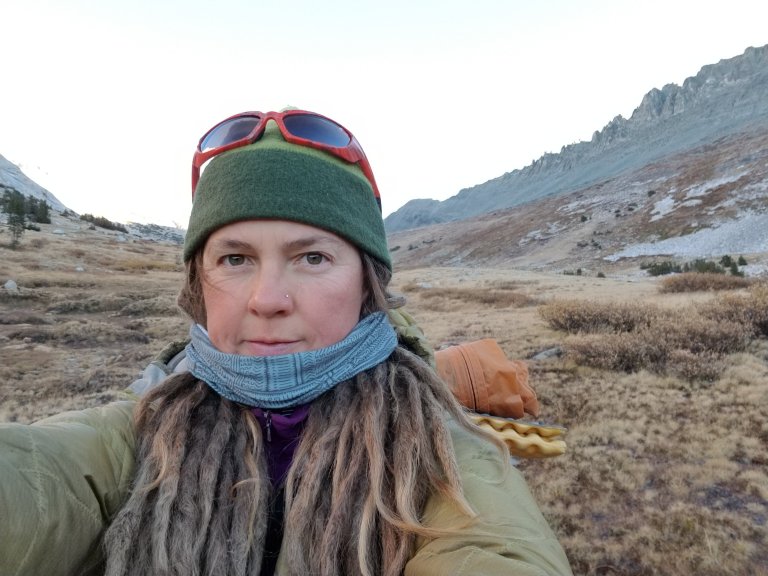 I was way overdressed. I bundled up the same as yesterday in tights, rain pants, two shirts, fleece, wind jacket, puffy etc. Within about 20 minutes I had to layer down. The climb up to the pass was super chill, a very mellow grade and all grassy with a few creek hops and some rocks to step on and over, but absolutely chill. At the top of the pass which is a broad saddle, it was all rock and the colors of the terra firma beneath me were beautiful. This rock seemed to be mixed granite of some kind, there were browns and reds in it and there were remnants of an old dried moss in splotchy patterns. The route became all rock at that point and there was a faint trail descending from the pass.

Even though this pass wasn’t nearly as insane as some of the one’s we’d crossed most recently, it was still impressive. The views really opened up and the immediate terrain of talus in a bowl surrounded by big granite walls was stunning in the morning light. I had hoped we would hit some sunshine after crossing the pass, even though it was the North side, but I could see right away, we had a long way to go before getting warmed by that magical radiating ball in the sky. 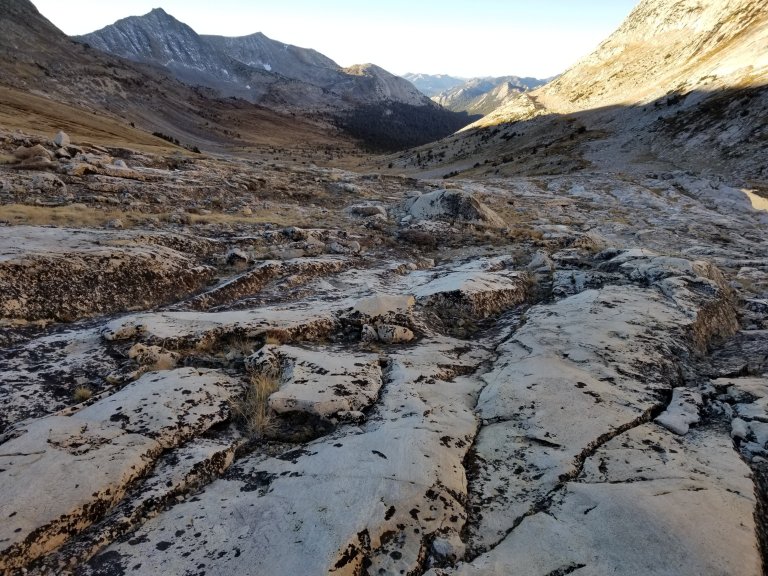 There was a bit of crusty snow, but fortunately it wasn’t too icy, and even when you were forced to step on it, it wasn’t slippery, thank goodness! We did have to crawl over some big talus, boulders and a few steeper sections of scree and a small snow field. But at this point, this is all par for the course, and it was non-technical. We kept a steady pace and I noticed part way down the mountin that the wind had all but disappeared. Nice! Now, all I need to do is get into that sun, I kept thinking.

All along the climb down, there were faint use trails that would come and go, disappearing into a talus field, then somehow re-appearing. At this point, my brain was craving the laziness of following a trail. Everytime it would disappear, it was like my brain hurt, it wasn’t computing the fact that I had to “look” and decide where to go next. This ended up happening for most of the way down. On our maps and on the GPS shown a trail, which covered the last 2 miles to twin lakes, but I’d also read that several faint use trails would be there to distract us. Of course. I wanted it to all be trail, the rest of the way. But it wasn’t. The trail is not a trail.

We would follow the faint trails until they abruptly led into a thicket of willow bushes and then a creek that was literally a drop off. Now what? We would solve the issue simply by bushwhacking or rock and creek hopping. When we would pop out on the other side, into an open area, suddenly a trail would appear out of nowhere. So, where was that trail before? Where did it come from and how come we had to crawl through these bushes?

I started to vocalize these thoughts out loud, and I think Hurlgoat thought I was annoyed. It did sort of sound like I was complaining. And maybe I was a little, but mainly it was just that my brain wasn’t doing a good job switching back and forth between being mindless and having to concentrate. Give me a trail or give me nothing, but not both!

Horse Creek Pass drops from 10,600 feet through Horse Creek Canyon, some 3,600 feet to Twin Lakes. For the most part, the grade is steady, but there were a couple segments that seriously dropped, steeply, and suddenly we were in a much more temperate environment. Soon, the trail that wasn’t a trail developed into a path through the trees and we realized we crossed the line between the rugged High Route into dayhiker territory. From the Twin Lakes Trailhead at Mono Village, are several popular hikes, one of them being Matterhorn Peak, which we walked right by at the pass. Honestly, for as many day hikers or weekend hikers as there may be going up to Matterhorn, the terrain was atypical and mysterious, not the typical day hike material. It really wasn’t until the last two miles that we were on an easy breezy trail. 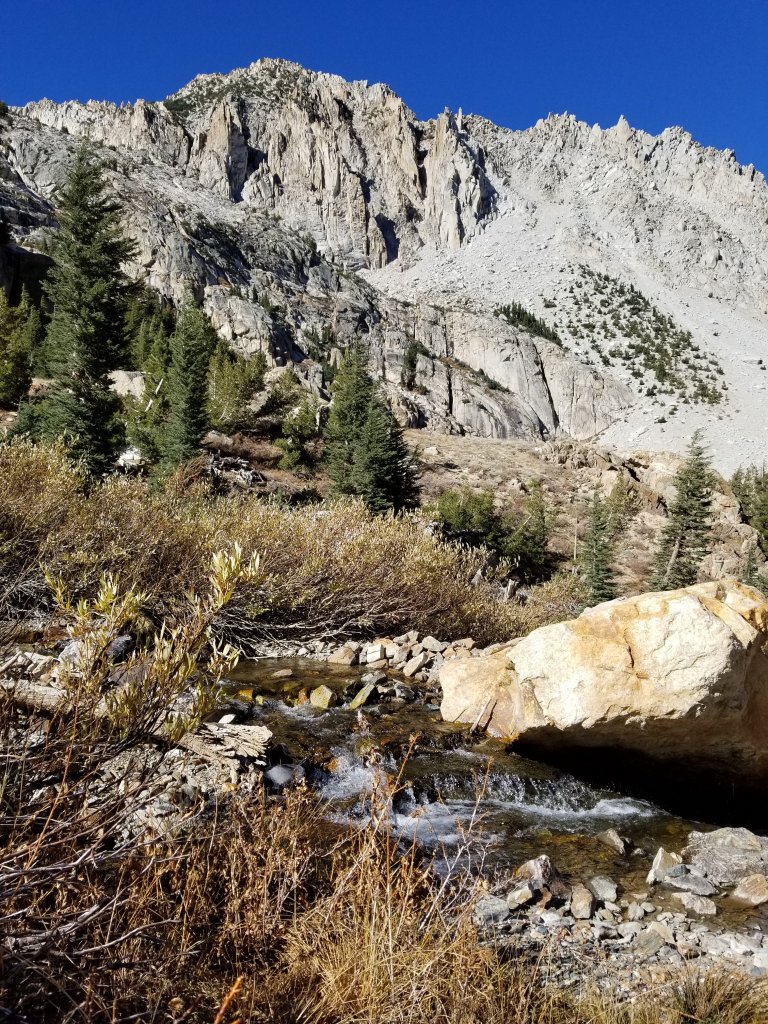 But once we were, oh my goodness, did we ever fly! I can’t even believe how fast walking on an actual trail is, it’s so mindless, it’s so flat and easy. My mind could hardly comprehend that up until this hike, the majority of the more than 7,000 miles I’ve hiked in the past few years, were on trails just like this. What on Earth did I do with such easy walking? Hurlgoat and I talked about this later, how being on the High Route, nearly all of the time our minds were forcfully engaged with navigating on both the micro and macro levels. Rarely did we get an opportunity to let our minds wander and it was never more apparent than now, while on the final two miles of trail that were like a dreamy, mindless sidewalk.

When we made it to Horsetail Falls, we stopped for one last break, took off our packs and fetched the last of the prescious water to fill up on. No more pure snow melt water every day all day. The creek weaves in and out of dense trees and in those shaded places there is already quite a lot of ice. These places recently got some snow and never saw enough sun to melt it off, creating icy coatings on rocks and icicles hanging in oddly contorted shapes from the branches of willows. We dunked our water bottles into the frigid water, it instantly made my hand go numb, youch was that cold! We looked up at the towering semi-frozen cascade in awe and with reverence, for standing there we knew we were leaving, we were saying goodbye for now, to this place, to this adventure, to this now. Time to move on. 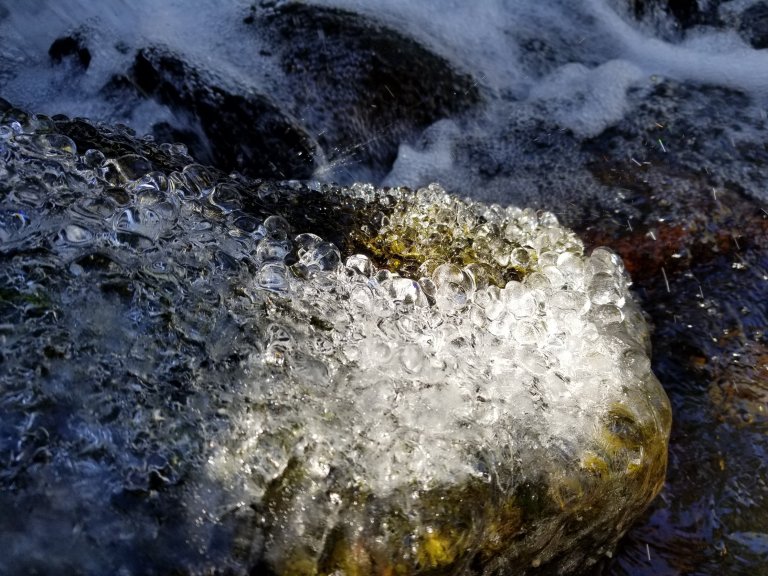 It’s always strange finishing a journey, coming to it’s completion, making that final mile and suddenly, it’s all over. The life you’ve been living, the matter of living purely in the moment, living strictly in the simplest of ways, living in the wild solitude of the mountains who whisper their wisdom into your ears as you sleep under a growing moon, the life that you know best, comes to a shocking halt. How can it be over? I love this life so much, more than anything. 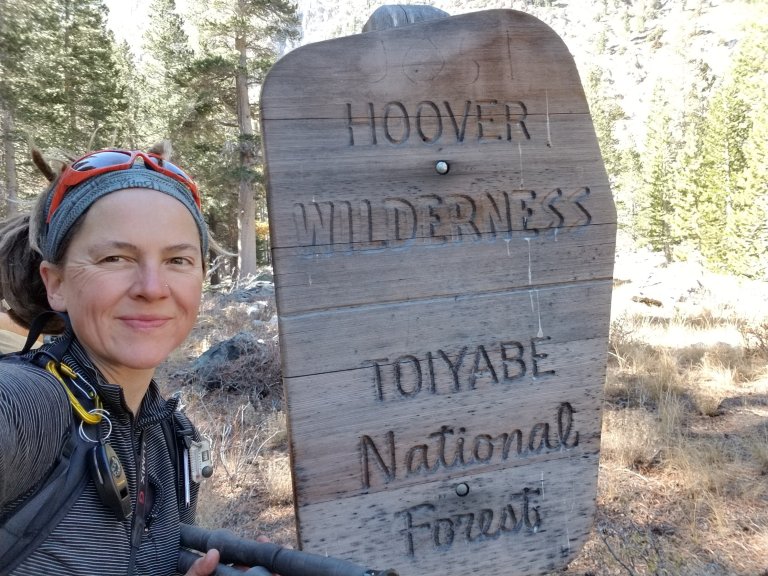 But it is over. Over for now. Just for now. Promise me it’s just for now. Please. We are ready though, ready to get away from the icy winds that lasted for the past two full days and nights, ready to eat “fresh” food that has nutrients and color. We are ready to take a hot shower, sleep in a comfortable bed with sheets and blankets with the freedom to splay out in any position you want while you feverishly dream, or sleep so deep you don’t dream at all. We are ready to celebrate, and ready to start thinking about what is next. What adventure sits on the horizon of our lives? How can I make this life continue?

We finally dropped down to the Twin Lakes Marina, at 7,200 feet, and noticed that the season down there wasn’t wintery at all. There were green grasses in the understory of the forest, the Aspen trees were golden, some were still green even, and the air temperature was appropriate for shorts and t-shirts. We busted out of the forest right into the campground and beelined for my Jeep. Yay, it’s still there! We dropped our packs in the back seat and stripped off a few layers, then headed over to the cafe for a celebration meal.

I was impressed by this little cafe, as I’d thought it wasn’t going to be much, in such a small place and being that it’s technically “off-season”. We walked into a homey, clean little restaurant and sunk our limp bodies into a comfy booth. One of the locals sitting at the breakfast counter shouted across the room at us, announcing “hey, you should try the special, it’s real good!” He didn’t bother to say what it was, but we inquired, and Hurlgoat ended up ordering it; chicken and vegetable stir fry, and he loved it! The ingredients were super fresh, colorful, seasoned and cooked just right. For some reason, I decided I wanted a BLT with french fries, and while I normally don’t eat meat, nevermind bacon, I decided now was as good a time as any to indulge. It was great and hit the spot like nothing else could have. We filled our bellies and sat there basking in the glow of completing yet another adventure. 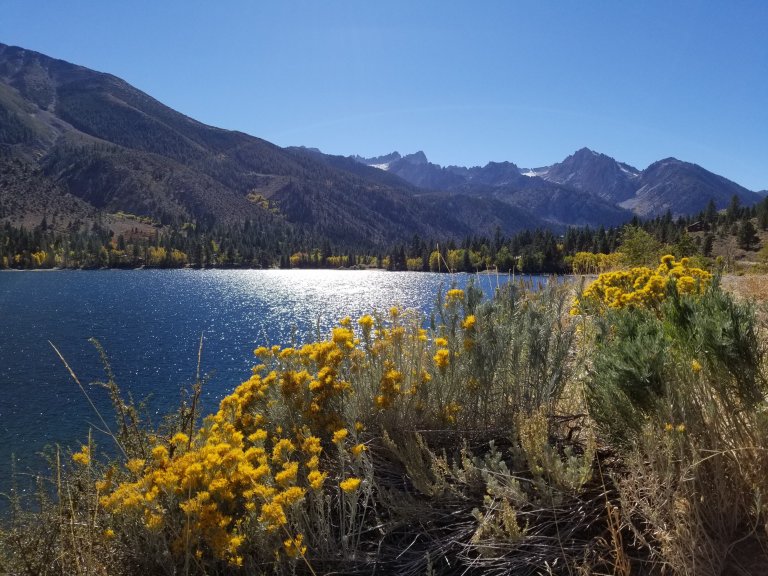